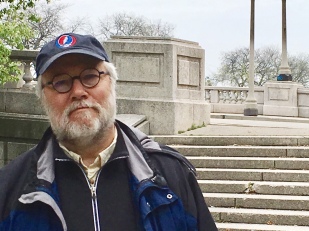 I’m a writer, teacher, and historian based in Madison, Wisconsin.

My writings on history, nature, and folklore explore ways that ideas have moved through time and space in oral, printed, and digital forms.

I’ve always been fascinated by eccentric, unusual, and atypical people or events that mainstream culture has overlooked. For more than a decade I wrote the syndicated weekly newspaper column, “Odd Wisconsin” highlighting bizarre and little-known stories from the state’s past.

My most recent book, Taking Flight: A History of Birds and People in the Heart of America, was published in March 2018. I’ve written three other books and edited or contributed to several more, as well as many journal articles, newspaper columns, and book reviews.

I joined the staff of the Wisconsin Historical Society in 1982 and retired at the end of 2018. I’ve also taught part-time at the University of Wisconsin-Madison from 1986 to 2019. I hold degrees from Harvard University (BA 1976) and Simmons College (MS 1981). At the Wisconsin Historical Society I led the teams that digitized and put online hundreds of thousands of rare books, manuscripts, photographs, maps, and other historical documents. I also curated several traveling displays and exhibits shown in venues around the nation. Between 2015 and 2018 I oversaw the Society’s education, publishing, and outreach programs.

Speaking: I’m happy to talk to civic and academic groups about my research and writing. For more information or to request a presentation, visit the Wisconsin Historical Society Speakers Bureau.  Venues normally cover a modest honorarium and travel costs.